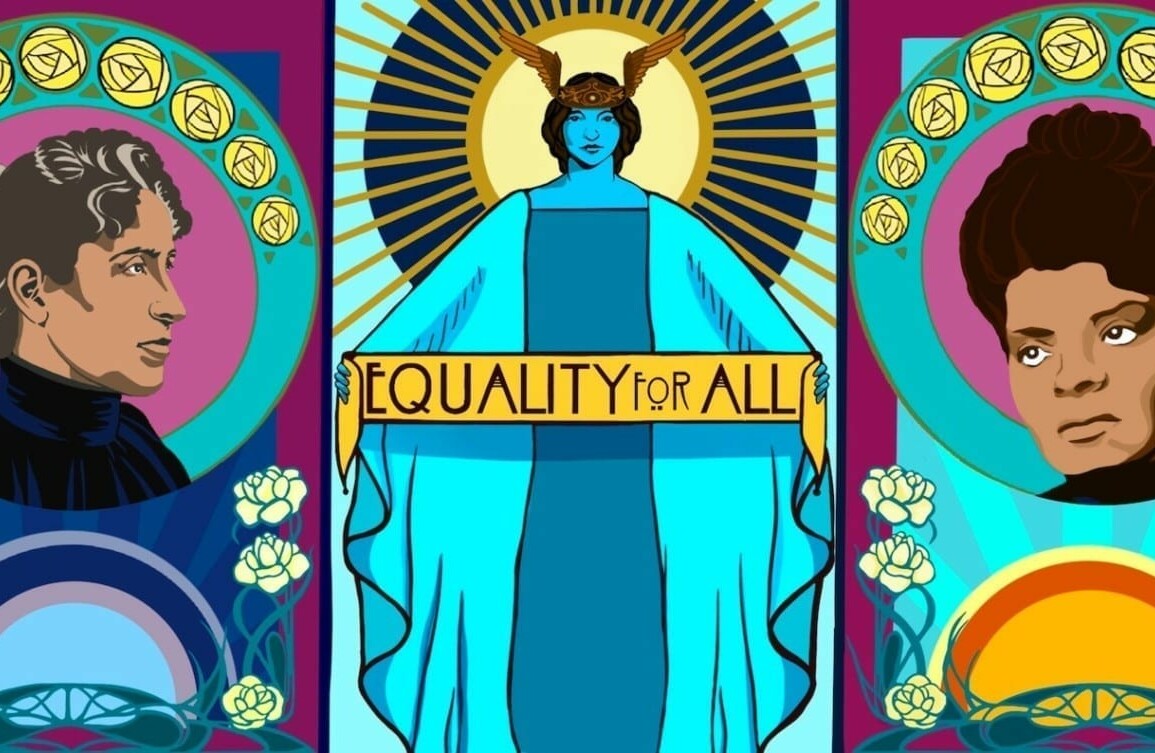 Design of the Equality for All Mural, Created by Sunny Mullarkey

WASHINGTON, Oct. 5, 2020 /PRNewswire/ — The 19th Amendment officially turned 100 years old on August 26, 2020, and the Women’s Suffrage Centennial Commission (WSCC) is continuing to celebrate the history of women’s fight for the vote. The WSCC hired South Carolina-based artist Sunny Mullarkey to create artwork honoring women’s long battle for the ballot and the generations of activists who led the way toward equality.

In honor of Tennessee’s critical role as the 36th and final state needed to ratify the 19th Amendment in 1920, Mullarkey will hold a live painting of the 20×6 foot mural, titled Equality for All, in the Sunken Gardens of Centennial Park in Nashville, TN from October 7-13. Social media users can follow the WSCC (@WomensVote100) on Facebook, Twitter, and Instagram for updates, photos, and videos during the week!

Once completed, the Hermitage Hotel, the historic site where suffragists and anti-suffragists set up their headquarters in 1920 during Tennessee’s 19th Amendment ratification battle, will display the artwork from October 16 to November 9. The mural will then travel to its permanent home at the Workhouse Arts Center in Lorton, Virginia.

The mural will depict suffrage leaders Carrie Chapman Catt, Mary Church Terrell, Alice Paul, and Ida B. Wells amid silhouettes of marching suffragists. The portraits of these trailblazing women will be surrounded by 36 yellow roses, a symbol of the victory of the movement. At the center of the piece will stand a mythological woman, inspired by historic suffrage artwork, holding a banner with the words “Equality for All.”

“The suffrage centennial in 2020 provided an unparalleled opportunity to lay groundwork to ensure that the story of women’s fight for the vote is remembered for generations to come. Through the Commission’s public art projects, such as the Equality for All mural, the history of the suffrage movement will remain visible and celebrated for the next 100 years and beyond,” said Anna Laymon, WSCC Executive Director.

“Murals are such a powerful tool for educating and inspiring. To see ideas or concepts displayed on such a large scale visually is so impactful. I am honored to work with the Women’s Suffrage Centennial Commission to bring the story of women’s fight for the vote to life through this medium for which I am so passionate, and to recognize the courageous women who never gave up on the fight for equality,” said artist Sunny Mullarkey.

“The Hermitage Hotel served as the central hub of suffrage activity leading up to Tennessee’s ratification of the 19th Amendment in August 1920. In fact, this year the Hermitage was designated a National Historic Landmark in honor of our important role in this history. We are excited to display the Equality for All mural as we continue celebrating the suffragists in Nashville and across the country who fought for equal voting rights,” said Dee Patel, Managing Director of the Hermitage Hotel.

“Once the site of a prison where suffragists were jailed for their peaceful protests, today the Workhouse Arts Center is a vibrant complex of galleries and museums celebrating art, honoring history, and building community. We are thrilled to bring the Equality for All mural to our space as a visual tribute to the women who sacrificed and persevered throughout the suffrage movement,” said Elena Romanova, Chief Development Officer at the Workhouse Arts Center.

The WSCC was created by Congress to coordinate the nationwide commemoration during the 100th anniversary of the 19th Amendment, which was officially signed into the U.S. Constitution on Aug. 26, 1920. The amendment prohibits the United States or any state from denying the right to vote based on sex, protecting women’s access to the ballot in the Constitution. Led by a bipartisan group of 14 women leaders, the WSCC has a nonpartisan mission to ensure that Americans across the country find inspiration in this important but often overlooked history. Learn more about the WSCC and its initiatives at www.womensvote100.org.