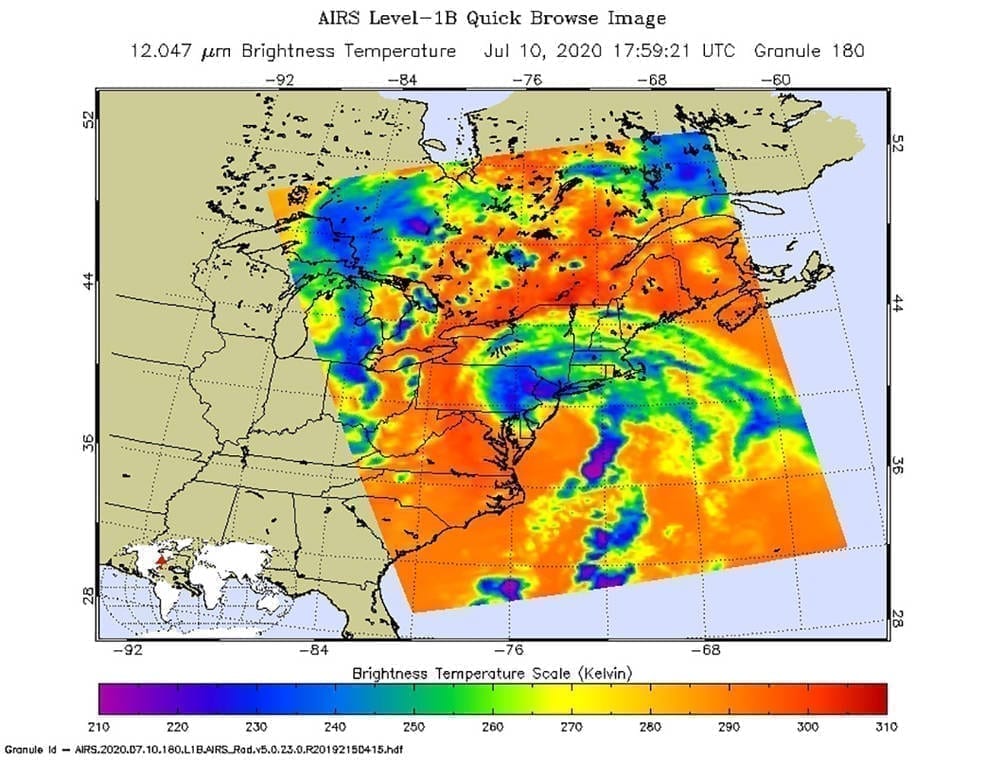 Tropical Storm Fay is sweeping across New England, with the center of the storm making landfall about 10 miles (15 kilometers) north-northeast of Atlantic City, New Jersey, at around 5 p.m. local time. At that time, Fay had maximum sustained winds of around 50 mph (85 kph). Forecasters predicted the storm will dump up to 7 inches (18 centimeters) of rain along its path from Delaware into New Jersey.

NASA’s Atmospheric Infrared Sounder (AIRS) collected this image at around 2 p.m. local time on Friday, July 10. The purple regions indicate very cold clouds lofted high into the atmosphere by the storm and generally linked to heavy rainfall. Warmer clouds closer to the ground show up as green and blue, while the orange areas denote mostly cloud-free parts of the sky.

AIRS, together with the Advanced Microwave Sounding Unit (AMSU), measures the infrared and microwave radiation emitted from Earth to study the planet’s weather and climate. Both instruments observe Earth from NASA’s Aqua satellite, which launched in 2002.

AIRS and AMSU work in tandem to make simultaneous observations down to Earth’s surface, even in the presence of heavy clouds. With more than 2,000 channels sensing different regions of the atmosphere, the system creates a global, three-dimensional map of atmospheric temperature and humidity, cloud amounts and heights, greenhouse gas concentrations, and many other atmospheric phenomena. The AIRS and AMSU instruments are managed by NASA’s Jet Propulsion Laboratory in Southern California under contract with NASA. JPL is a division of Caltech.

More information about AIRS can be found at: